Welcome to Read Wine, where there’s a fine line between wine and crime…

A cup of coffee.  A bottle of wine. And a really good book.  The recipe for sabotage.
Aspiring business owner Trixie Pristine is ready to make all of her dreams come true.  She's fulfilling every girl's fantasy by surrounding herself in coffee, wine, treats, and books.  What more could she want?  Teaming up with her closest friends, Cora Taylor and Sally Greeves, the three women are about to embark upon an opportunity of a lifetime, opening the quaint bookstore, Read Wine.

But suddenly, this new endeavor isn't all that Trixie hoped it would be.  As strange things begin to happen, the women realize someone is out to sabotage their new business venture.  Refusing to put down the coffee or relinquish the wine, the three friends meddle in police affairs to get to the bottom of the mysterious events.

Grab your favorite bottle of red, curl up, and get ready to uncover how Read Wine all started.

They're opening no matter what. A dead body won't stop them.

Determined to open Read Wine on schedule, Trixie Pristine won't let anything stop her and friends, Sally and Cora from opening their dream business in small town Romero.  A bookstore with wine, coffee, and pastries is every woman's dream, and these three ladies refuse to relinquish their dreams.

Just as they're on the brink of opening Read Wine, there's a wrench thrown into the plan.  How can they open for business when a dead body is on the floor?  Not only does it ruin the ambiance, but it also wasn't in their business plan.  As suspicions rise, their friendship gets tested.  Everyone knows that you must keep your friends close and your enemies closer. But, this particular dead body belongs to Sally's most despised enemy.

Can the girls band together to uncover the secret to the murder without destroying their business before the Grand Opening?

There's more mystery at Read Wine book store than on the shelves...

Enjoying the success of small town bookstore Read Wine, Trixie, Cora, and Sally can finally focus on other aspects of their lives - like planning Cora's upcoming wedding.  As the friends prepare for the big event, strange calls inundate the bookstore but they decide to sit back and enjoy the wine. Businesses always get prank calls and hang ups; nothing to worry about.

But when the caller reveals himself, the girls know there's more on the line than a teenage prankster.  The caller wants money - and he wants it now, or the women are going to pay dearly.  Suddenly, Read Wine needs the help of Cora's fiancé.

Can they rely on the one man who fooled them all to save the business and save themselves?

All Trixie wants is to help her friend.  Traveling to the Bramble Patch Winery, she's ready to start carrying Deanna's housemade wine at the Read Wine bookstore.  But when she uncovers the body of Deanna's husband in a very strange place, Trixie's compelled to help her friend.

The winery is successful, but someone wants them to fail.  As Trixie delves into the case, she realizes that things aren't always as they seem. A bottle of revenge can ruin the whole vineyard.

Moving to Romero is the best thing that has ever happened to Macie Mitchell. Loving her new best friends, Trixie, Cora, and Sally from the Read Wine bookstore, Macie knows she's right where she's supposed to be.  But when her boyfriend is arrested for embezzlement, Macie, the small town lawyer, faces the biggest case of her career.

Looking into the crime, Macie discovers she may not know her boyfriend as well as she thought.  Now, it's up to her to enlist the help of an ally as she searches for answers.

As the lies start piling up, can the lawyer dig out the truth before it's too late?

Matchmaker Cassandra Collins is no match for murder.

Trixie Pristine, owner of Read Wine bookstore, heads to Sand Dunes Resort and Spa for a 4-day Women in Business Conference hosted by Cassandra Collins, motivational speaker and the owner of a matchmaker service.

When Trixie meets Presley and Tillie at the conference, she knows she’s found some lifelong friends. But will those new friends help her find out who killed Cassandra Collins after she drops dead on stage?

Which suspect will they focus on? Will it be one of Cassandra’s matchmaking competitors, a member of her family or maybe her mistreated assistant finally had enough abuse?

Can the three friends solve the crime and learn how to win in business?

It’s the most wonderful time of the year… just don’t eat the cookies.

“I gave this book 5 stars because I thoroughly enjoyed it. The characters were fun…” -Amazon

‘Love this series! 5 stars for great characters and a great store. Love the town and background characters. Grab a glass of wine and curl up for a great read.”- Amazon

“All the excitement and mystery you could ask for.” -Bookbub 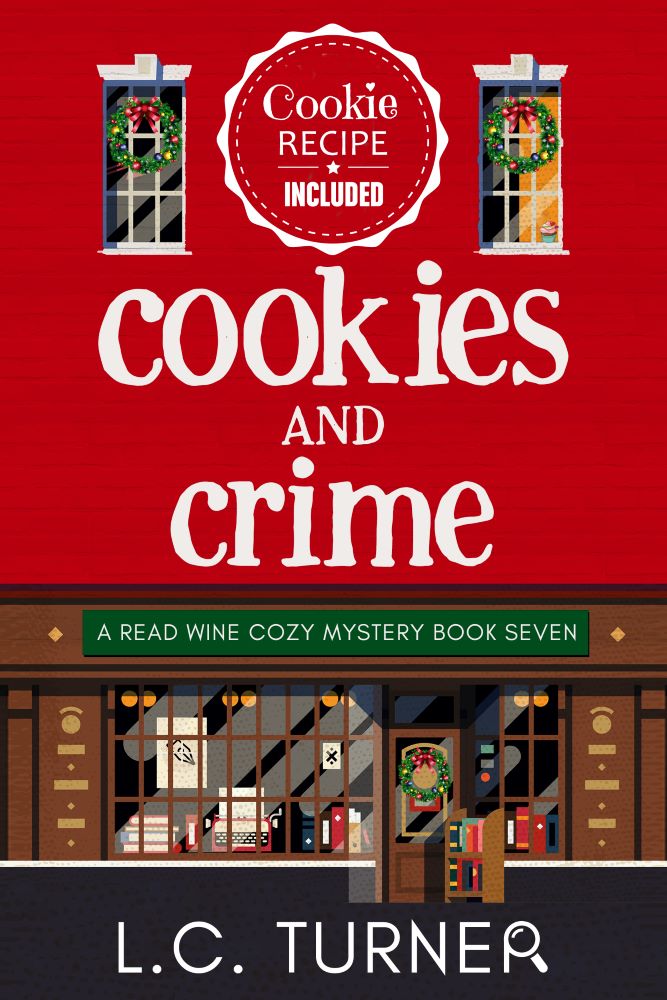